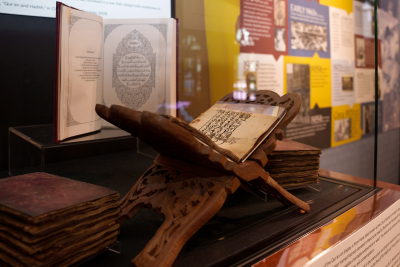 A handwritten copy of the Qur’an from 18th-century Harar, also known as the City of Saints, in modern-day Ethiopia, is displayed as part of “The Transformational History of Ar-Razzaq Islamic Center in Durham.” In the Americas, enslaved African Muslims often continued to write out the Qur’an from memory. (John West/Trinity Communications)

North Carolina’s first known mosque was established in Durham nearly 65 years ago, and a current exhibit honors the rich, living history of African American Muslims in the city.

“The Transformational History of Ar-Razzaq Islamic Center in Durham” will be on view through December 12, 2022, in the Jerry and Bruce Chappell Family Gallery at the Perkins Library.

Through a selection of artifacts, photographs and video, visitors can take an historical journey over the decades and gain an understanding of the extensive contributions made not only to the community but also to the country.

Mona Hassan, associate professor of Religious Studies, History and International and Comparative Studies, curated the exhibit. She hopes visitors will realize how deeply rooted Islam is in the Carolinas, extending centuries before the founding of the Ar-Razzaq Islamic Center in Durham.

“The exhibit itself starts off pointing to the presence of Muslims in the Americas since at least the 15th century,” she says. “These early Muslims came from Spain, North Africa and West Africa, and they included scholars like Omar ibn Said, who was enslaved in the Carolinas.”

Hassan also wants visitors to understand how integral Muslims have been to the region.

“The African American Muslim community revitalized Durham’s West End neighborhood and have established an important hub in the struggle for human rights and civil rights ever since the 1960s,” she points out.

While luminaries such as Imam W.D. Mohammed, Malcolm X and Muhammad Ali repeatedly journeyed to Durham, Hassan notes that it has been the sustained, collective efforts of the local Muslim community that have transformed the Triangle region over the decades.

“There’s a lot of joy in that process,” Hassan says. “Visitors can see the happiness and sense of community radiating from the faces in the photographs that give life to this exhibit — whether they are in the schools, the prayer space, summer camps, making music or engaged in some form of service.”

“This exhibit honors that living Muslim history and dynamism that we should all learn from and appreciate,” Hassan reflects.

The research team also worked in cooperation with the Ar-Razzaq Islamic Center.

“May G-d shower his blessings upon all of them. We are also thankful for the Jerry and Bruce Chappell Family Gallery at Perkins Library for showcasing the transformational history of the first mosque here in the state and our contributions to the city of Durham. It has certainly been an honor to work with Duke and others on this important historical community project.”

The exhibition is part of Hassan’s internal grant project selected by the Office of the Provost’s “Reckoning with Race, Racism and the History of the American South,” which was funded by the Duke Endowment.

Exhibitions in the Perkins Library are also sponsored in part by the E. Rhodes and Leona B. Carpenter Foundation. Additional funding was provided by the Duke Human Rights Center.